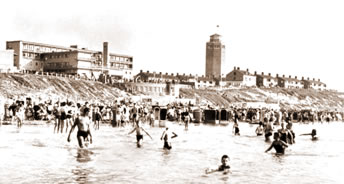 Zandvoort was already a well known place in 1100 and it was called 'Sandevoerde' back then; a combination of 'sand' and 'voorde' (benefits). Until 1722 the area was in the hands of the Lords of Brederode. For centuries the village lived from fishing, but with the arrival of the 19th century a new era began for Zandvoort. Esquire Barneart made plans for a new resort that could easily be reached from Haarlem. 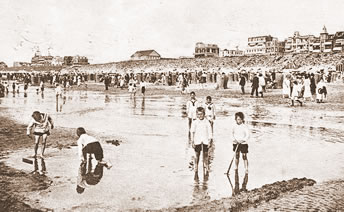 Early 19th century, the benefits of seawater was discovered and praised. A trend originating from England, following the example of several other spas. In that time the sea was tremendously popular with the upper class (nobility and young entrepreneurs), who visit the coastal area for their health as well as social entertainment. One of the supporters was the local physician Dr. Mezger who was a pioneer in this field. The result of this fortunate discovery was that many rich people began to go to Zandvoort. They even came from abroad - including the nobles. Empress Elizabeth of Austria (Sissi), for example was treated by Dr. Mezger in Zandvoort in 1885 during a visit. She stayed at guesthouse Paula. So the small village began to transform into a seaside resort.

In 1881 the 'Zandvoort aan Zee' station was connected to the railroad network, and in 1899 there was a tram connection with Haarlem (later expanded to Amsterdam), what promoted beach tourism significantly. The beautiful station building is still there. Due to the rise of mass tourism and fast train connections the percentage of foreigners rose as well and the local dialect and other cultural expressions slowly mixed in the margin. By 1921, when the 'Zeeweg' was constructed, Zandvoort was on its way to become a well known destination. As a well known beach resort and beach, Zandvoort made itself gratefully available to its visitors and showed the facilities the best way it could.

The Second World War caused a lot of damage to Zandvoort. On the 23rd of May 1942, access to the beach was forbidden . A few months later, pretty much the whole beach had to be cleared. Bathhouses and boulevards were demolished for the construction of the German Atlantic Wall. Dozens of bunkers are still present in the area.

After the war followed a reconstruction project that formed the foundation of the resort of today. Tourism rose sharply in the following years. In 1948, the race track of Zandvoort was constructed. There were even once Formula 1 races here, but the province of Northern-Holland refused to give a license for this due to the noise disturbance it caused to the surrounding areas. Nowadays, still almost half of the jobs in Zandvoort are related to tourism.